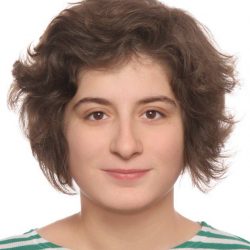 Yana is 22 years old, she is Ukrainian and has a bachelor’s degree in social work (Academy of Labor, Social Relations and Tourism). She is the Chair of the Board of the “Teenergizer”, an Association for Adolescents and Youth, since 2015. She has been working in the field of support and protection of the rights of vulnerable adolescents for 7 years in the region of Eastern Europe and Central Asia, is the author of the report “Main barriers to adolescent HIV testing in Ukraine, Russia and Georgia.”

Yana was born with HIV. When she was 10, she learned about her HIV status. At the age of 13, she spoke openly at the International Conference on Children and HIV on behalf of adolescents living with HIV in Eastern Europe and Central Asia. In addition, as a result of an open speech on her HIV status in Moldova and advocacy in June 2013, the Ministry of Health introduced disability benefits for all HIV+ children.

Also, as a result of an open speech at an extended meeting of the Coordinating Committee for HIV Prevention in the Sverdlovsk region in Russia in December 2013 and other advocacy activities, it was decided that government agencies should pay special attention to the youth living with HIV. She spoke about HIV+ adolescents from the EECA region at the 2016 UN General Assembly HIV/AIDS Summit, and was a panelist at the 22-nd International AIDS Conference in Amsterdam in 2018.